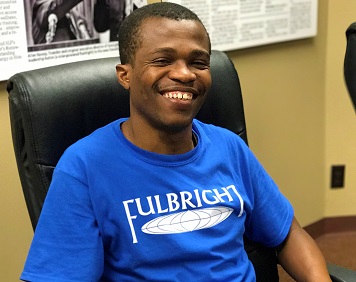 His infectious smile around the office says it all.  He feels blessed to be studying in America as a Fulbright Scholar.  He can’t wait to return to his homeland – Haiti – and make it a better place.  He is a Christian and believes that God’s plan for him is coming to fruition.

And he’s happy to be gaining experience as an intern at SonLight Power.

François Vibert (pronounced Fran-SWAH Vee-BAIR) calls himself “lucky” but attributes his luck to the plan God has for him. “I would still be in Haiti doing who knows what, if not for my godmother,” François said. “My parents were very poor and my mother wasn’t well so she took me in and raised me.”

François’ godmother, who is also his aunt, saw to it that he attended the best private schools in Les Cayes.  “She knew I always had a dream,” François said, “and I couldn’t jeopardize the opportunity she gave me. So, I studied a lot.”

That’s when the absence of electricity began to have a real impact on him. “I know I had to walk many kilometers to find light to study,” he recalled, “and it fueled my interest in doing something to help.”

François’ dedication to his studies earned him a scholarship to engineering school in Cuba where he studied for six years.  He then returned to Haiti where he worked in a powerplant and volunteered with a social service agency that focused on housing.

But he knew that wasn’t God’s plan.  He applied and received a prestigious Fulbright Scholarship which he has used to fund his pursuit of a master’s degree in renewable and clean energy at the University of Dayton.  SonLight Power’s executive director, Kevin Sasson, met François when Kevin spoke to his engineering class a few months ago.

“It’s supernatural – there’s no other way to describe how everything unfolded for us to connect other than it was a God-thing,” said Kevin.

“Just think of the sequence of events that had to happen for François and SonLight Power to meet in Dayton, Ohio of all places.  And the precise fit between the SonLight Power mission and François’ interests in applying clean energy to improve the quality of life in Haiti.  All of it – it’s not a coincidence.”

When he receives his degree a year from now, François aspires to return to Haiti and launch a start-up that will focus on bringing residential solar energy to fellow Haitians.  “I want to help the people, especially the underprivileged,” Francois said.  “I’m not a rich man but I can share my knowledge. I can help guide people.” 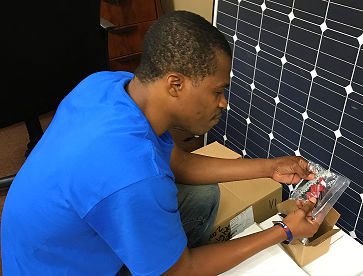 He’s not waiting for his degree before trying to make an impact. François is already working with a professor at Dayton to improve the thermal storage capabilities of solar cookers – an invention that could benefit hundreds of thousands of people in the Haitian countryside that must gather wood or other flammable materials to build a cooking fire.

As SonLight Power’s project list in Haiti continues to grow, we consider it a blessing to have a skilled engineer like François with us who understands the unique challenges of installing solar power in the places we go.  He’s the face of Haiti’s solar energy future and he’s starting right here at SonLight Power.