Puerto Rico:
You are saving lives with love and solar power after Hurricane Maria

It’s hard to believe, five months after Hurricane Maria wreaked havoc on Puerto Rico that more than 400,000 residents of the island still have no electricity.  And many of those who do have power keep their fingers crossed because blackouts are frequent.

“Can you imagine that happening here?” Craig Kindell, director of missions for Spanish River Church, asked incredulously from his office in South Florida.

Spanish River Church of Boca Raton, Florida is one of SonLight Power’s enduring partners. Over the past several years, SonLight Power has equipped Craig and the congregation at Spanish River with the training and equipment needed to implement solar projects that complement the church’s mission strategy.

SonLight Power and Spanish River teamed up recently for a mission trip to share solar-powered ministry with residents of the American island territory.

“They’ve cleaned up a lot of the destruction from the storm,” Craig said, “but there are still power lines dangling from above and it’s especially bad out in the rural areas away from the cities.” 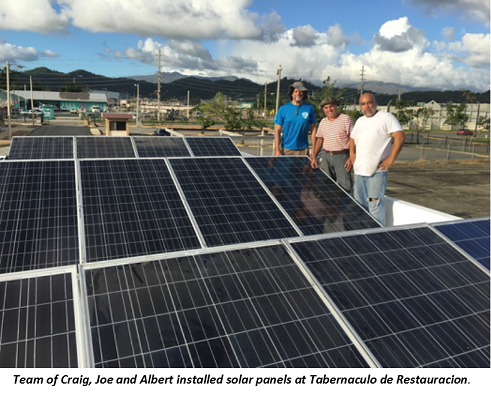 Craig and his small team charged into this challenging environment in late January, guided to specific projects by a local expert familiar with the Puerto Rican landscape and by church members who had family living on the island.

The largest project on the list was a church in the southeastern town of Humacao – the Tabernaculo de Restauracion – where Maria had first made landfall as a strong Category 4 storm.

The church, Craig said, had operated as a food bank for the communities around Humacao and the storm had flattened it.  “We knew the church well and [Spanish River] had raised $54,000 in October and November for their food bank.”

SonLight Power’s Allen Rainey reached out to suppliers and coordinated delivery of the solar equipment to the island.  The equipment for the church and food bank, donated by Alternative Energy (altE) Store, had originally been designated for a clinic but was repurposed for the church after the storm.

Team members also installed solar systems at the homes of three Puerto Ricans whose critical medical needs had been challenged with the loss of power:

“If you’re in need of a little encouragement or just want to know that your contributions to SonLight Power add value to something greater, just look at these life-saving examples of impact,” Kevin Sasson, executive director of SonLight Power, said.  “These powerful stories and images remind us why we do what we do.”

“Our partnerships with Spanish River and altE are invaluable and show how we’re able to expand mission impact effectively through collaboration,” Kevin said.

Call to Action
There is so much more to do in Puerto Rico.  Many families there remain without power and have no dependable drinking water supply.

Several high-impact solar projects have been identified that can be implemented when funding becomes available.  Please prayerfully consider a gift to SonLight Power to help the American citizens of Puerto Rico in their time of need.  To give today, click here.